Want to protect your home from thieves? A security system is a popular option. However, it’s not very effective if you don’t install it properly, fail to activate it when you aren’t home, or use “123456” as the security code. The same applies to code signing certificates. They’re the best way to protect the integrity of your software and prevent tampering by hostile third parties, but only if code signing best practices are followed. Otherwise, you might as well not even bother.

If you still need convincing, just look at the recent SolarWinds breach. Sloppy code signing practices left the door wide open for hackers, and they were able to inject malicious code into legitimate software updates without anyone noticing. As Mike Nelson, DigiCert’s VP of IoT Security, explains:

Those SolarWinds updates got pushed to nearly 18,000 customers, including Microsoft, Nvidia, Intel, and Cisco, who were suddenly left exposed via a backdoor hidden within the SolarWinds software. It’s nothing new – a similar situation occurred with Asus in 2019 – and attackers will continue to attempt code tampering as long as companies are lax with their processes.

So, what is code signing exactly? Why is it such an important part of the software development cycle? And, most importantly, what are the code signing best practices that your organization should always follow?

Let’s hash it out.

What is Code Signing?

First, let’s take a step back and review what code signing is and how it works. Code signing certificates help to:

Code signing uses public key infrastructure (PKI) to apply a digital signature as proof of legitimacy and integrity. Extended Validation (EV) code signing certificates go a step further. A more vigorous verification process is carried out before certificate issuance, and the certificate itself is stored on a physical USB device as an additional layer of security. EV code signing also gets rid of Microsoft SmartScreen and other browser/operating system (OS) warnings thanks to the higher level of identity verification that’s initially required.

Without code signing, Windows generates the warning message on the left prior to installation. The warning goes away when a signed application is detected, as seen on the right.

Code signing is widely performed across all software platforms, device types, and application categories. In fact, some platforms actually make code signing a requirement for publishing.

Why is Code Signing Important?

Users want to be confident when downloading a file, and if there is any doubt in their mind then they will tend to reject the software altogether. Code signing acts as a sort of “digital shrink wrap” that tells the user that not only is the file coming from a verified source, but also that it hasn’t been tampered with in the meantime.

Code signing provides peace of mind and builds trust with end users, making them much more likely to install your application on their machine. It leads to more downloads, more users, and an improved reputation and brand image.

How Does Code Signing Work?

As we touched on earlier, code signing certificates are similar to other types of digital certificates in that they’re built on PKI. Their implementation and use depends on whether we’re talking about the developer or the consumer. We’ll start with the developer.

The general code signing process that’s carried out during the software development cycle is typically as follows:

Code signing more straightforward for users. Most operating systems will check for a code signing certificate prior to software installation. When a code signing signature is detected in the application, the OS will: 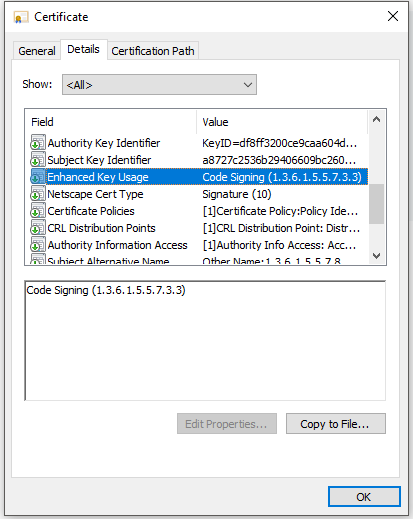 Viewing the properties of a code signing certificate.

Now that we know all about how code signing works and why it’s so beneficial, let’s get into the code signing best practices. These should always be used by your organization in order to maximize the effectiveness of your code signing certificates.

4. Use Test-Signing Only When Appropriate

5. Review Code Prior to Signing

7. Don’t Rely on One Certificate

All Signs Point to Best Practices

As with any security measure, code signing is only as effective as its implementation and use. No company intends to fall victim to software tampering and end up like SolarWinds or Asus, but it only takes one mistake to leave yourself exposed. As Nelson of DigiCert says:

“For those of you who may be down the road with some of these bad practices — stop. Get control of what you’re doing and minimize the risk for your business. SolarWinds isn’t the only organization with bad code signing practices — let’s use this compromise to improve the way we operate and keep our businesses safe.”

The human element in the code signing process is most often the weak link, but technical mistakes can doom you as well. By following the best practices that we’ve outlined, you can minimize risk and educate your staff about how to sign code as effectively as possible. That way, you can consistently protect your software, your customers, and the brand that you’ve worked so hard to build.